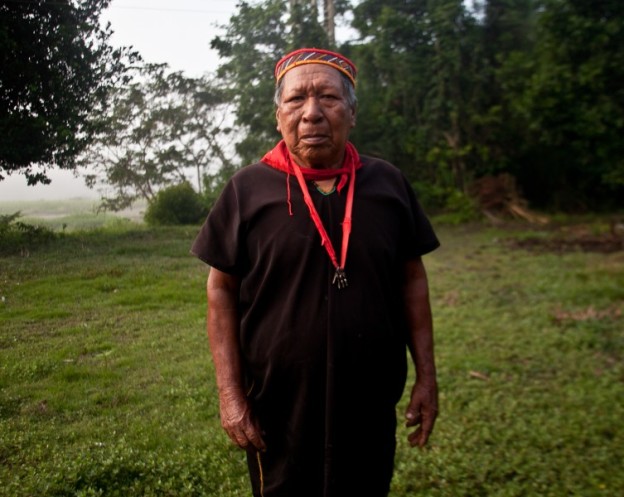 An interview with Cofán elder, Mauricio Mendua, provides insight into the tribe’s past, present and expectations for the future.

This blog has been reposted from partner, ClearWater: http://www.giveclearwater.org/2014/10/community-profile-mauricio-mendua/

Where were you born?

I was born near the community of Cofán Dureno. At that time there were no cucamas (white people), there was no oil company, just us Cofán living in the forest.

Why did you move to Sábalo?

Once the company came life changed for us. The noise, the pollution, alcohol— Many of us did not like these things. We also started becoming dependent on money. I did not like that. That is not our way. A group of us realized that all of this was happening because of the company and because of roads, so we decided to move far away from both. We came to Sábalo because it reminded us of Dureno before the company: no roads, lots of animals and fish, far from noise. We can still live here off of what the forest provides. It’s been many years now, maybe 35, since we came here. We founded this community with certain rules to ensure a good, peaceful life: no hunting within the community territory, no loud music, no beer except on special occasions, no roads can be built, and we will not allow any oil company to operate here.

We came to Sábalo because it reminded us of Dureno before the company: no roads, lots of animals and fish, far from noise. We can still live here off of what the forest provides.

Do you still hunt and fish?

I have pain in my knees now and I cannot walk very far so I can no longer hunt and fish. It’s difficult for me to even harvest yucca and plantains. My wife died four years ago and now I live alone, near my children. All of my children and grandchildren live in Sábalo.

I was seeing a healer in Chandianai (another Cofán community) who was curing me with ayahuasca. I want to drink ayahuasca again, but it is difficult and expensive to reach that community. It is very far from here and I need a lot of gasoline.

Have you ever visited any of the Secoya healers that live upriver, like Cesario for instance?

I visited Cesario before. He is a good healer. There are many stories about him. Many Cofán have gone to him for treatment. I went with my wife to see him once. Maybe I will visit him again to take ayahuasca.

Are there many Cofán healers left?

No, there are hardly any. There is one in Dureno and one in Chandianai. They are the only two I know. They are both old. Once they die there will be none left. All of our greatest shamans are gone. Guillermo, Marina’s husband, he was a very powerful shaman. He was killed by oil workers. They poisoned him with alcohol. This young man’s (points at Guillermo, the Cofán technician installing rain catchment systems in Sábalo) great grandfather was a very powerful shaman. He would take ayahuasca and call the animals close. One time I remember there were no huangana (white collared peccary) to be found. The people were hungry and asked him to call the huangana. He drank ayahuasca and called to the spirits, but no huangana came. So he drank guando (Datura) and called to the spirits. He was in a trance for three days. Then, hundreds of huangana came right to our homes. We grabbed our spears andserbatanas (blowguns) and had more food than we could eat. Those shamans were good people. They helped us. Now there are none left. There is no one left to call the animals. That is why the animals don’t come.

Do the young people drink ayahuasca?

Ha! No, they are afraid. They just drink beer. They spend all their money on beer. I don’t like this. In Dureno it is worse. The young folks drink beer every day of the week. It makes them stupid and angry. I don’t know where they get the money for it. I think they steal from their parents. Now the young men are drinking beer here in Sábalo. Before, we would just drink chicha— white chicha, sweet chicha— for festivities. That was okay. That was our culture. Beer is not of our culture. It clouds the mind while ayahuasca provides visions and teaches the people.

I was told that you are also a healer. Would you say this is true?

Oh, I can only treat some things: mal viento (witchcraft: literally “bad wind”), ghosts, things like that. I use tobacco, leaves, and sometimes I prepare ayahuasca. I have some ayahuasca vines growing and a house in the woods where I prepare it. I used to prepare ayahuasca and drink it often. Sometimes it was very strong and I would see the most beautiful visions. I would see people in the forest behind my house. They were dressed like Cofán, but they had the most beautiful tunics and they wore bright, colorful macaw feather headdresses. The ayahuasca told me that they were people of the jaguar. There are all kinds of spirits in the forest, good and bad. There are devils that walk the Earth. But these people were peaceful. They watched over us.

They no longer watch over you?

I don’t know. I don’t think so. I haven’t seen them in a long time.

Have you noticed changes in the younger generation of Cofán?

Yes, so many changes. The younger generation is lazy. They no longer drink ayahuasca. They drink too much beer. They don’t want to hunt with the serbatana. Before we would hunt with the serbatana and prepare a poison so strong it would take down a huangana, like a bullet. The younger generation doesn’t seem to value our culture, they just think about money. They don’t wear the tunic like I am wearing. When I die there won’t be anyone left who wears the tunic in Sábalo.

Oh yes, before it was just the Cofán, Secoya and Siona who lived on this river. We lived in peace and tranquility. There were enough animals and fish to go around. Then the company came, and then the colonos (non indigenous homesteaders) and Kichwa and Shuar settled here. Now you go up the river and it’s full of people. They don’t hunt and fish just for their own food, but rather to sell. Now the animals and fish are disappearing. In Sábalo there are still lots of animals. If you hunt an animal you share it with the family and neighbors. That’s how we always lived, us Cofán. We didn’t used to hunt to sell meat. In the dry season when the water is low you can still go to small streams and see the fish piled up. You can catch them with your bare hands. In February, the driest month, everyone has stacks of smoked fish.

And yet, that no longer seems to be enough for some people. They want money. Now everything is about money.

What do you think about the rainwater catchment system being built at your house?

They say it will provide clean water. I am very happy about this. We collect water at the stream behind my house, but sometimes we get parasites and stomach aches. Good water is the most important thing.

Good water is the most important thing.

Can you tell me about the oil spill that happened last July?

The oil flowed from Dureno all the way down here. We were told not to go in the river, but where were we supposed to bathe? It reminded me of the days of Texaco when the water would flow black with oil. You could see dead animals everywhere: fish, capybara, deer, the oil killed them all.

Now the state oil company, Petroamazonas, is doing seismic testing in Sekoya Remolino, not that far upriver. Do you think they will eventually come here?

Well, they haven’t made it here yet and the people will resist, but they seem to be getting closer all the time. I hope they do not come here. That would be the end of Sábalo.