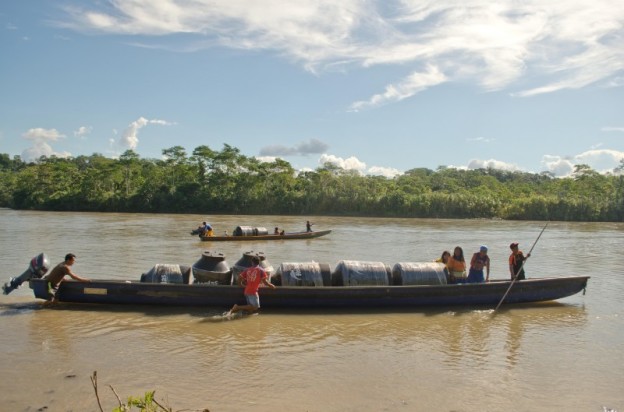 Installing rain catchment systems in indigenous communities in the northern Ecuadorian Amazon occurs in many different phases. Getting the materials used for system construction to the beneficiary families is one of, if not the most, challenging stages in the process. Materials are many and varied: from the galvanized metal tubes that make up the structure, to the sacks of cement used to build the system bases, to the little bolts and screws that hold it all together. Materials come from different parts of the country, including the cities of Guayaquil, Quito, and Ambato. Coordinating their delivery to communities requires careful planning. Some communities are accessible by oil roads and delivery trucks can drive right in to center of the community, but many communities are located along rivers, only reachable by canoe. In addition, many beneficiary families live great distances from community centers. This presents an interesting challenge when it comes to transporting cumbersome materials

Nationalities coordinator Emergildo Criollo leads this process. He plays the fundamental role of intermediary between the businesses that deliver materials and the local coordinators for each community. This round of installations has been even more challenging than previous installations. ClearWater is building 89 rain catchment systems in seven communities of two indigenous nationalities, the Cofán and Siona. Of these seven communities, only two are reachable by road. This has required consistent communication— or as consistent as possible in areas with limited cell phone reception— with local coordinators to plan the distinct deliveries. As mentioned, materials come from all across the country, and therefore arrive at different times. Local coordinators have been wonderfully successful at mobilizing beneficiaries on short notice to pick up materials at distinct drop-off points.

As a Cofán leader who has led his people in distinctive capacities over the decades, Emergildo has a special ability to mobilize the Cofán in these moments. The greatest display of mobilization took place last week, when thirty-eight 1,100 and 600 liter water tanks were carted in two large trailers from Guayaquil, on the coast, twenty-four hours to the banks of the Aguarico River outside of Lago Agrio. Approximately fifty Cofán—men, women, and children— and twelve canoes from three communities showed up to transport the tanks. There was a joyful buzz in the air. People were laughing, children playing, chicha was served; it felt like a party.

The Cofán worked together to load the bulky plastic tanks one-by-one onto the canoes. Once filled, the canoes set off with their precarious-looking cargo of tanks and people. When it comes to canoeing, the Cofán are artists. They achieved a delicate, even graceful balance, and not a single tank or person went overboard. At times, as many as seven canoes set sail at once: what a truly amazing sight! Some of the canoes were destined for the community of Bavoroe, a short distance away, but others were headed for Ukavati, over an hour up the Pissurie River. Once the canoes arrived, they dropped off the tanks and made the journey back to pick up more. The whole time Emergildo moved from group to group, organizing the canoes, counting tanks, and directing the traffic. Emergildo was beaming. He was in his element: the conductor of a symphony of Cofán canoes. It was an unforgettable day on the river.