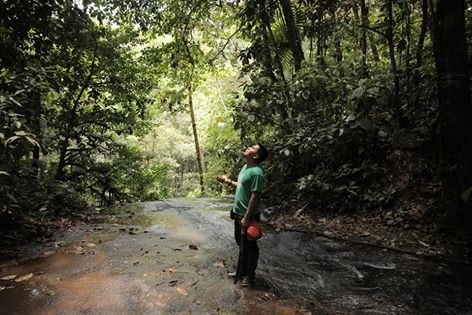 FPIC, or Free, Prior and Informed Consent, is one of the most important principles in international law relating to indigenous peoples.

It states that a community has the right to give or withhold its consent to any proposed project or development on the lands or affecting the lands that it customarily or legally owns.  Laid out in Article 10 of the United Nations Declaration of the Rights of Indigenous Peoples, FPIC is intended to both preempt and prevent conflicts between indigenous peoples and the corporations and governments that seek to utilize indigenous lands, mainly for resource extraction.

Unfortunately, FPIC has been extremely difficult to implement on the ground.  Countless corporations throughout the world, including palm oil giants Asia Pulp and Paper (APP), Wilmar, Golden Veroleum, and Cargill (to name a few), have committed to upholding FPIC and the broader human rights of the communities with whom they engage, but time and again fail to keep their promises.

A recent report documents APP’s commitments including “actively look[ing] for and adopt[ing] any input and feedback from stakeholders as well as from the local people;” “implement[ing] FPIC with indigenous people and local communities;” “responsible resolution of conflicts;” and “respecting human rights.”  APP, however, sabotaged these commitments at every stage in the process by not informing communities of meeting times or opportunities to give their free, prior and informed consent; by not recording complaints made by communities or even establishing mechanisms for handling such complaints; and, by forcing communities off their lands and threatening them with violence if they did not comply.

So, I wonder, given the recent and historical evidence that FPIC is difficult to enforce on the ground, do we need a different approach to fulfilling indigenous rights?  Practically speaking, FPIC intends to give more power to the indigenous people, but effectually it doesn’t. Corporations find ways to manipulate the system as noted above, and some have even bullied village chiefs into marking their fingerprint on plan documents, one that they cannot understand but which at the legal level suffices to show “consent.”  That is coercion not consent. Corporations and governments are the keepers of power: they determine when FPIC will (or will not) take place, the methods through which to implement FPIC, and the standards to which they hold themselves. We need a mechanism, a law and an enforcement body, to ensure that power originates, instead, with indigenous people.

Requests for Proposals (RFPs) are common in business, the nonprofit sector and government in which an institution publicizes a need for which they seek solutions.  For example, a company may like to build a new lobby but it wants to have options, so it announces an RFP and different architecture firms submit ideas, plans and budgets to compete for the opportunity to build the new lobby.  What if we applied a similar concept to the relationship between indigenous communities and extractive industries?

We need to take the principles of FPIC and apply them to a new hierarchy.  We know that the current law requires that any institution must obtain communities’ uncompromised consent to their already developed projects, so why not shift the order of operations to give the indigenous people real power from the get-go. Instead of requiring that corporations attain indigenous peoples’ consent for a project after it has already been designed (and often times after it has already begun), have the law require that no institution can propose or approach a community about a project unless that community has specifically requested a project based on its own terms through RFPs.  Many communities will not request any projects, and that is their right.  But, others may seek to develop their lands and this approach gives them the ability to construct the parameters, limit the scope, and administer it for themselves in ways that include their traditional knowledge, sustainable practices and culture.

Implementing a paradigm where indigenous communities set the terms for projects on their land and choose which organizations and businesses they work with will fundamentally change the way extractive industries operate and the nature of development itself.  This idea will not make corporations happy, will upset the status quo with governments, and will pose many challenges, which is precisely why the idea should be considered.

Many critics of this proposed shift in power may claim that indigenous communities do not have the capacity required to administer requests for proposals or develop them to begin with.  If indigenous communities seek to develop their lands through industry, they will either have the capacity to construct projects on their own, or they will solicit assistance from their community or international organizations.  If they do not publicize RFPs it does not mean that they are not capable, it may simply mean that they have no intention of opening their doors to industry, as is their collective right.

Other critics may say that this idea will severely harm the economy and extractive industries by reducing the amount of industrial projects which are needed to keep up with demand.  To this, I would first say that the status quo severely harms human beings, which is an understatement, as the status quo is fatal.  Then, I would say that our current economy, one which is heavily based on excessive consumer culture by demanding exorbitant amounts of palm oil, timber, gold and oil is not sustainable, and shifting the power is the only responsible thing to do.

Our current power dynamic favors money over justice and has led to both moral and practical issues.  We cannot and we should not take the status quo as a given and changing it will be really difficult: we need to change preconceived notions of power, laws, governing structures, communication networks, political priorities, and economic growth expectations.  Most importantly, our collective will – from the consumer all the way up to our heads of state – must change to value longevity of all our livelihoods over fleeting satisfaction.