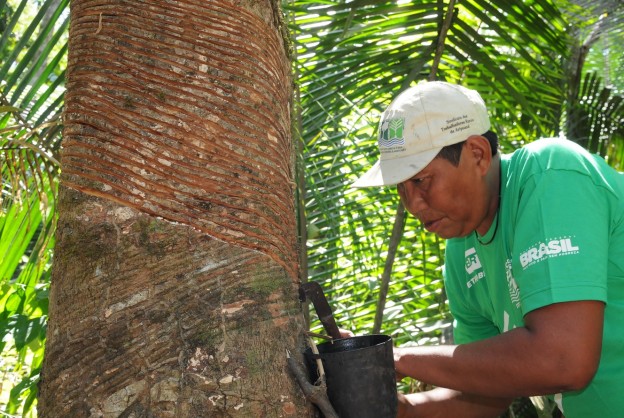 Imagine you are on a river boat, meandering down the Amazon. The August sky looms dark and grey overhead, the cool river breeze a welcome respite from the vapid humidity. The silver river glides by as the air is shattered by the sonorous cries of howler monkeys. Then, suddenly, you hear it: the sharp, staccato sound of sharpened metal on aged wood. Someone is cutting down a tree.

What would be going through your mind at that point? Would you be righteously angry about trees being chopped down in the Amazon? Would you be dejected and resigned that deforestation seems to have become an accepted and blasé part of our lives? Or would you be curious about who was wielding the axe and why?

Rainforest conservation and the people who live there

Sometimes we tend to forget that people live around and in tropical rainforests across the world. Therefore, rainforest conservation cannot focus solely on the flora and fauna that grace these ecosystems, but has to include safeguarding the homes and rights of the many people who live there.

Emily Sohn, a freelance journalist, explains how her views on rainforest conservation evolved during an assignment to the village of Roaboya, deep in the Amazon rainforest.

She happened to observe some men chopping down a tree near the village and talks about the conflicting emotions she experienced. She says “…having already gained an intimate view of these people’s lives, I was able to reflect on deforestation in the Amazon in a more nuanced way. Before the trip, I’d thought cutting down trees in a rainforest was a universally bad thing. By the end of my days in Roaboya, I was conflicted”.

Of course I am not the first to put forward this concept of marrying environmental conservation with empowering indigenous people to continue living and thriving in their ancestral areas; it has been around for decades. In an article in the academic journal AMBIO, Manuel Ruiz-Perez and colleagues explain that starting in the mid-1980s “conservation circles were directing their attention to Amazonian deforestation, [and] those…concerned with human development were trying to bring forest people’s interests to the forefront”.

How did extractive reserves come to exist?

A movement arose at this intersection between preventing deforestation in the Amazon and protecting the interests of indigenous and traditional people who lived there. “The fate of the Amazon turned on a most unlikely environmental hero, a poor rubber tapper and union organizer named Chico Mendes”, whose story is portrayed eloquently in a recent documentary “A Fierce Green Fire”.

Chico Mendes began working as a rubber tapper when he was only 9 years old. But soon he found his way of life threatened by projects aiming to set up cattle farms across the Amazon.

Supported by various environmental groups Mr. Mendes traveled to Washington DC to communicate his ideas about finding a balance between destroying the forest for short-term financial benefits and shutting off all access and economic activity.

“He [Chico Mendes] proposed the creation of extractive reserves – protected areas that would allow public land to be managed by local communities, with rights to harvest forest products” writes journalists Jan Rocha and Jonathan Watts in an article in the British newspaper The Guardian.

Extractive reserves can be way to protect forests and peoples

In 1987 Mr. Mendes won the United Nations Global 500 award for his environmental work. On December 22, 1988 he was shot dead in his backyard on his way to take a shower by a cattle-rancher who was incensed by Mr. Mendes’s activism. His murder caused widespread outrage and condemnation in Brazil and at the international level; by 1990 the Brazilian government had established the first extractive reserve, Alto Jurua´ in the province of Acre in the western part of the Amazon rainforest (The Chico Mendes Extractive Reserve was set up soon after).

Today there are close to 50 extractive reserves covering more than 12 million hectares of the Amazon rainforest, an area almost three times the sizes of the country of Switzerland.

In an ideal world extractive reserves would benefit both the rainforest and local, indigenous people. Even though resources are extracted traditional indigenous harvesting methods are often less damaging than modern techniques. Forest loss would be minimized through sustainable management and indigenous people would have the opportunity to both continue traditional lifestyles and improve their financial conditions while living in a protected area.

The monetary benefit to local people living around extractive reserves is an important part of their potential success. Without a chance to harvest and profit from forest products in a sustainable way, it would be understandable if indigenous populations turned to more environmentally damaging economic activities, like logging or cattle-ranching.

In other words, “the living forest has to be worth more than cut-down dead forest if people…are going to want to protect it over the long run” says Steve Schwartzman, the Tropical Forestry Director at the Environmental Defense Fund.

Brilliant ideas often falter if they are not executed with proper planning and followed through with perseverance. Extractive reserves are no different.

Many extractive reserves have continued to function and flourish. In 2008 a condom factory was established in the town of Xapuri, in the Acre province of Brazil. This factory has been using latex gathered by the local population from the Chico Mendes extractive reserve. According to the BBC the sustainable harvesting of rubber from protected areas of rainforest “is at the heart of conservation and these [economic] policies have created opportunities for people to engage in more sustainable practices.”

It’s important to remember though that extractive reserves are not just a source of forest products; they are also home to many people. The establishment of these reserves, and the rules that come with them, can also negatively affect indigenous people who may not be prepared for the new restrictions.

A recent study by Jessica L’Roe and Dr. Lisa Naughton-Treves, researchers at the University of Wisconsin-Madison, looked at how rules around an extractive reserve in the Nanay river watershed in the Peruvian Amazon affected community members of two remote indigenous populations.

They found that restrictions on logging had greatly increased the importance of non-timber forest products (NTFPs) for cash incomes. But not all families were able to gain access to NTFPs as harvesting often involved traveling long-distance by motorized boats. This led to an increasing income gap developing between families who had the ability to extract the NTFPs and those that didn’t.

The authors point out that “sweeping reforms can have unintended side effects in forest dependent communities”, and that “policy makers and practitioners ought also to guard against creating additional hardship for poorer members of a community”, as quite often they are the ones without the technical know-how or ability to switch to harvesting NTFPs and away from more destructive livelihoods like logging.