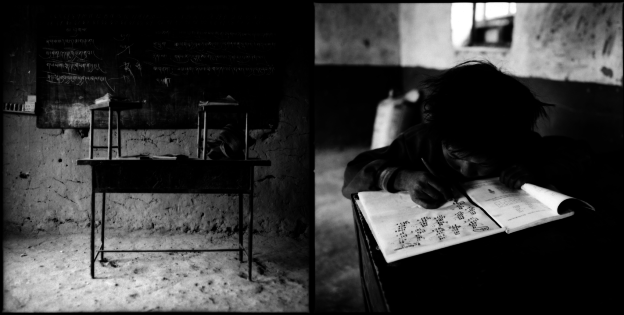 Language preservation is vital to protecting cultures, and in Tibet, much like any other community around the world, some people wish to adapt to changing norms while others wish to remain steadfast in tradition.

Since 2011, more than 100 Tibetans have self-immolated.  Repression by the Chinese government and security forces have characterized life in Tibet for hundreds of years and recent political, religious, economic and social human rights violations continue to shock our consciences. Protesters are shot and killed; children, men and women (and their loved ones) are often abducted and tortured for protesting or talking about protesting; and, people are arrested for waving Tibet’s flag and communicating abroad about events in Tibet. Monks and nuns who practice Buddhism and follow the Dalai Lama are regularly subjected to re-education programs. China has forcibly resettled thousands of Tibetans from their agricultural lands into newly constructed towns, stripping them of their traditional source of income. [1]

Every aspect of Tibetans’ lives are threatened and their language isn’t immune.  A recent report from BBC describes the struggle to keep their language alive in schools that now use Mandarin for everything ranging from the curriculum to the signs in the hallways and the exams. While some Tibetan parents send their children to Mandarin schools because they believe their children will have greater economic opportunity in the future, others fear a loss of culture.

Further complications in protecting the primacy of the Tibetan language stem from significant economic changes in the region including big industry (specifically water bottling) and a new railway between Beijing and Lhasa carrying about one million migrant workers, Chinese and foreign tour groups, and Tibetans each year [2].

Many young Tibetans who identify with their history and tradition, even when studying on the coast, raise their voices against cultural exploitation.  In 2010, Tibetan university students in Beijing organized a protest against the government’s education plan that stated that local languages would be secondary to the common language (Mandarin).  Protesters carried a banner proclaiming: “Protect Ethnic Minority Languages and Promote Chinese Civilization.”[3] Students are aware of their right to learn in their own languages and believe that if they are prevented from doing so, their cultures will one day disappear.