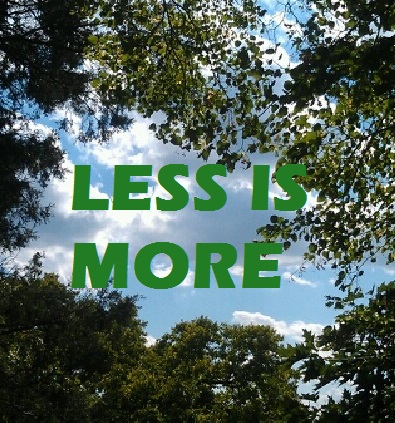 A campaign by RFUND, Less is More, seeks to foster behavior that puts less stress on our resources. By being conscious of how much it takes and what goes into producing the things that we buy and do, we might begin to demand less, think more, and effectually protect the indigenous peoples of the rainforests.

Consumerism is a major force driving deforestation, mining and resource exploitation within the world’s rainforests, which has significant effects on climate change and our ability to sustain a planet fit for humans.  Directly affected, but often sidelined, are the indigenous and tribal peoples who have lived for thousands of years in the rainforests.  They are the only people who have learned how to live in harmony with the forests – they take what they need and they ensure that the biodiversity remains for future generations.

Individual and collective everyday behavior – driving cars, eating in restaurants, drinking coffee – places demands on the world’s natural and human resources.  While we must eat, drink, engage in recreational activities, we must also be aware that

What if, this month, you bought less?

What if, this month, you gave up going to the movies and donated that $20 to the Quechua people of Peru so that they can protect their lands and sustain their right to life?

What if you gave up one thing each month for the sole purpose of helping the people of the rainforests?

If you challenged yourself to doing these WHAT IFs…

You would not only directly help indigenous people, you would also directly be demanding and consuming less, thereby lessening your strain on scarce resources and working to rectify climate change and human rights abuses in the Rainforests.