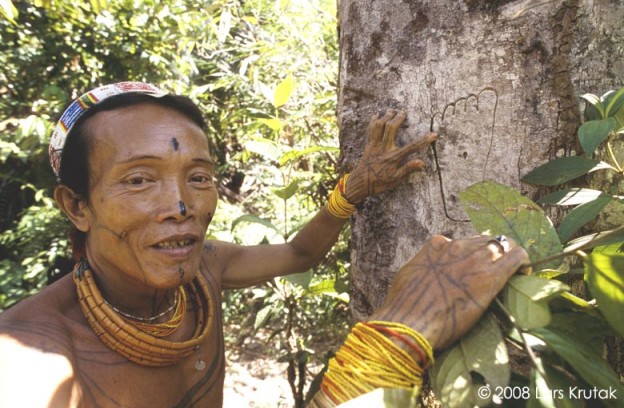 What connects peanut butter with soap? Or cereal with cosmetics? Or chocolates with laundry detergents? The answer is one of their ingredients – “vegetable” oil.

Now, if I were to ask you to picture in your mind what “vegetable” this oil comes from what would you see? A cabbage? An eggplant? Would you see a reddish fruit, about the size of a large plum? This would be the fruit of the oil palm tree and, as of 2013, almost a third of global vegetable oil produced was palm oil, extracted from the flesh and kernel of the oil palm fruit.

The need for more land

About 85% of the palm oil produced today comes from Indonesia and Malaysia. But land suitable – and available – for oil palm cultivation is running out in both these countries and companies and investors are looking across the oceans for new areas to bring under palm oil agriculture. One of the places where palm oil plantations are expanding rapidly is the Congo Basin in Africa. In fact, since 2009 “around 1.6 million hectares of new oil palm developments have been announced, and palm oil companies are actively searching for larger areas”, according to a report by the non-profit organization Rainforest Foundation UK.

The demand for land to set up palm oil plantations (and extensive logging) has led to the destruction of large portions of this rainforest, and this deforestation is expected to increase in the future. There is probably no way to prevent the expansion of palm oil plantations given its cost advantage over other vegetable oils in the global market. In fact, in an interview with the academic journal Nature in 2013, William Laurence, a forest conservation scientist at James Cook University in Cairns, Australia, said that “oil palm is such a lucrative crop that there is almost no way to stop it”.

Of course, there is nothing inherently evil or unsustainable about an oil palm tree. It’s all about what is destroyed to make the plantations and how indigenous and local populations are treated when these plantations are set up. Developing countries are often caught in an apparent difficult position between economic progress on the one hand, and environmental and social responsibilities on the other hand. But I would argue that this is a false dichotomy and without protecting the rights of the people who are affected by “progress”, the so-called developments turn hollow and superficial.

One of the more important social issues connected with the setting up palm oil plantations is respect for the rights of indigenous peoples to the land that they have lived on for centuries, but have no “legal” claim to. In a report on palm oil plantations in Indonesia by the Friends of the Earth and Sawit Watch organizations, a leader of an indigenous group puts forth this concept eloquently. He says, “The government official asked me if I have a land ownership certificate and I answered that every single durian tree, and every single tengkawang tree, and every single rubber tree that we or our ancestors have planted are certificates. I am an indigenous person born here. My ancestors have already defended this land for generations ”.

But these inalienable, if somewhat officially intangible, rights are often waved away by both governments and corporations. The Rainforest Foundation UK report goes on to say that “governments are [often] able to hand people’s ancestral land to oil palm companies without consultation or their free, prior, informed consent and without suitable compensation”. Of course, stopping the development of any more plantations would prevent further encroachment on the lands of indigenous people, but we already know that’s not going to happen.

So if we cannot stop oil palm plantations from mushrooming across the Congolian forests, what can we do? Well, as the demand for palm oil continues to expand so does the power of the market – that’s us – to ensure that the cultivation, harvesting and production of palm oil is as sustainable as possible, not only for the environment, but also for the thousands of indigenous people who call rainforests their home. And as the power of the market grows we must heed what a wise man once told Peter Parker – “with great power comes great responsibility”.

In an informative article published by the Thompson Reuters Foundation, author Megan Rowling points out that there are changes afoot in the international palm oil industry. Since the latter part of 2013 several large multinational companies involved in palm oil production – including two of the largest ones, Wilmar International and Golden Agri-Resources, both based in Singapore – have publicly promised to enforce policies that “no longer cause deforestation, nor exploit workers and local people”. Another large company, Unilever, owner of well known brands such as Ben & Jerry’s and Dove, said that they “believe it is better to work with suppliers as a first step to persuade them and help them to move to more sustainable agricultural methods.”

Companies are taking small steps towards producing sustainable palm oil, and continued consumer demand will be important if they are to continue on this path towards complete sustainability. On the flip side, corporations have no incentive to use sustainable palm oil in their products if consumers don’t care – or know – either way.

The power of the market: What can we do?

This is where we can come in; if we are informed about what products are made using sustainable palm oil – whether it be a bar of chocolate or a bar or soap – we can then send a message to companies by buying these products. We can also communicate to companies that we – as consumers – are looking for products that are made using palm oil that was produced in a sustainable manner that respected the rights of the indigenous people where it was produced.

Bastian Sachet, director of the non-profit Forest Trust told Thompson Reuters that eventually “what the [palm oil producer] will start selling to a Nestle or a Mars is a quality, a price and a story (emphasis added) – before they were just selling a quality and a price.”.

The best part is that we know that growers and producers heed the demands of big corporations who themselves are swayed by the choices that you or I make. A recent example was highlighted in the New York Times, in an article authored by Steven Greenhouse. A workers group, called the Coalition of Immokalee Workers, was able to collaborate with several large restaurant chains and retailers to ensure that tomato growers in the state of Florida paid fair wages and refrained from workers’ rights violations such as sexual and verbal harassment. This example also highlights the power of individual workers coming together and fighting for their rights as a unit.

There is always hope

The Rainforest Fund is involved in projects across the Congo basin that aim “to mitigate the negative impacts from palm oil development on rainforest communities by seeking greater transparency and awareness amongst decision makers.” While we can influence the functioning of corporations via our buying decisions, that’s just one side of the sustainability coin. To ensure that the people in the Congo Basin who are directly affected when palm oil plantations are set up get a fair and equitable deal, we also need to make sure they have full access to all the information they need to make a decision, and that their concerns and ideas have a voice. And that’s a story I will explore more in the future.

The idea is not to put an end to the expansion of palm oil cultivation in the Congo Basin but to learn from the mistakes we made in the past and step up our efforts to ensure that the future of palm oil production is both sustainable and respectful towards the rights of the people who call rainforests their home.