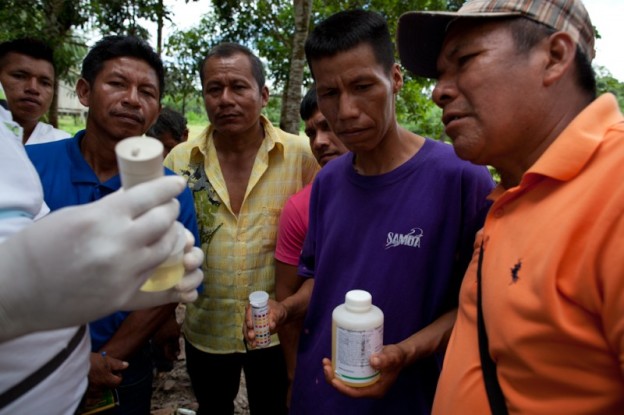 Rainforest Fund partner organization ClearWater and Indigenous communities in the Ecuadorian Amazon are working hard in the wake of the latest oil spill to ensure that families have clean water.

It started as a rainbow sheen on the surface of the turbid waters of the mighty Aguarico River, but within hours it turned into a thick layer of crude oil that stuck to the bottom of canoes, accumulated in stagnant inlets, and smeared the rocky shores of indigenous villages for miles downriver.

It was July 2nd, and a Petroamazonas pipeline had ruptured, spewing thousands of barrels of crude oil into the Aguarico River. When would the company stop the spill? How poisoned is our water? When will it be safe to bathe, wash clothes, and fish in our river?   Will the company clean up the spill? These were the questions on the minds of many of the Cofán, Siona and Secoya people who live downriver from the ruptured pipeline.

But there was silence.

According to community members, neither the state oil company, Petroamazonas, nor the Ecuadorian government sent health officials to visit the downriver villages in the wake of the spill. Rather than provide critical information about the quality of the water that the indigenous communities depend on for their basic needs, the state oil company equivocated about the extent of the spill. Official pronouncements capped the spill at 100,000 gallons, of which the majority, they said, had been “contained”; however, a confidential source at Petroamazonas leaked information to the civil society collective, Yasunidos, that more than 785,000 gallons of oil had been spilled. You can read more information from Yasunidos here.

So what kind of emergency response measures did Petroamazonas and the Ecuadorian Government enact in the wake of the spill?

On July 7th representatives from Petroamazonas delivered a bag of groceries to each affected family as compensation for the “inconvenience”: one 10 lb. bag of rice, one 4 lb. bag of sugar, oatmeal, noodles, a bag of salt, five cans of tuna fish, and two bottles of cooking oil, likely totaling under $20. Community members from Cofán Dureno, Playas de Cuyabeno, and Sábalo say that company officials claim that “social compensation” will come in the form of jobs: cleaning up the spill.

In the wake of the spill ClearWater is raising urgent funds, which will go directly to community led water quality monitoring efforts in the region, as well as to ramping up the construction of rainwater catchment systems in downriver indigenous communities, such as the Cofan community of Sabalo (approximately 100 kilometers downriver from the ruptured pipeline, yet still observing the effects of the oil contamination).

Next week in Secoya territory, a team of young water quality monitors and mappers from the Cofan, Siona, Secoya and Waorani peoples will document ongoing effects of the oil spill; collect testimony from affected community members; as well as engage in a broader monitoring project designed to provide community members with information about the sources of contamination affecting the river water that sustains their lives, such as oil industry pollution, African palm pesticides, industrial waste, and sewage from nearby oil boom towns. Data results gathered during this program will be shared locally with all community members, and included on our interactive map.

Please support the indigenous peoples of Ecuador’s northern Amazon in their efforts to monitor the quality of water that sustains their life, and in doing so, build the critical skills and tools needed to demand an end to the poisoning of their ancestral waterways.